In Continuation of Crisis in Pakistan

Comment
The mismanagement of state by politicians whether in government or in opposition, the clerics and the forces that be have brought the country to a very dangerous brink. What has necessitated to say 'Balochistan is inseparable part of Pakistan'? While the fact is Balochistan is Pakistan as the remaining units of federation. Who has emboldened a segment of disgruntled Sardars to make expressions in bold letter In Switzerland portraying their nasty desires to replay 1970/ 71 debacle. While our foreign ministry has failed to create an impression that solidarity of Pakistan is not vulnerable by any country including Switzerland, the politicians are more worried about 'Do Panama' or 'Avoid Panama' and so is judiciary. Moreover, Article 184-C has not been invoked to adjudicate upon the factors who are responsible for having brought Pakistan to this juncture. Where is the intelligence Shah of Pakistan? The self styled Plato and Socrates of media who would paint the true picture and expose the factors responsible for this malady. The fact is, the pigmies, the self seekers, the reckless looters, the feud mongers in society in robes of clerics are mainly responsible for keeping the people misinformed about real problems of the country. The nation which is unfortunately an addict to personality cult has been thrown into quagmire of debate about Sharifs, Zardris, IK and sectarian troublemakers.

In continuation of Crisis in Pakistan.

Comment
A high court judge who retires from service cannot practice within the territorial jurisdiction of the court he last presided, and in case of Justice of Supreme Court of Pakistan he cannot practice as an advocate in any court within the Republic. But how strange it is that ex-army chiefs are free to engage themselves in identical services of foreign countries for benefits larger than they were getting in their own country. These incumbents used to be repository of very sensitive secrets of the Republic but when they are in the hands of new employers in consideration of larger benefits who can guarantee that they will keep the secrets within their chests? Why does not media and nation take notice of this danger and make public aware of the consequences everybody’s bonfides apart. How regrettable it is that our retired chiefs of Army also get their shelters in alms from Kingdom of Saudi Arabia (refer Pervaiz Musharraf’s interview).

In continuation of Crisis in Pakistan

Comment
Sehwan Sharif too targetted. Has not state lost it's writ and the govt including all it's organs lost justification tn rule. Then what is visible in future? Anarchy where people armless and helpless and anarchist lethally armed with ruthlessly coutenanced.and NS and other like him in govts will be seen enjoying in Dubai and Riaz. SAUDI dogma is motive force for today's carnage. NS may get a clearance letter in panama from Riaz in reward.

In continuation of Crisis in Pakistan

Comment
Can physical force alone solve menace of terrorism ? The honest answer is in loud NO. Pakistan cotinues to be in grip of (initially Zia's pro-Saudi anti-Iran terrorism) . In it's earliest form it's centers were pro-Saudi seminaries whose organisors were given prize posts in govt services and sole available electronic media i.e. PTV was handed over to fire brand extremist clerics one of whom every morning would float distorted stories from early history as gospel aimed at undermining centuries old sectarian harmony and ushering in sectarian feuds. By the passage of time Zia's political scion has been in power through the external forces who had brought zia .(to continue)

In continuation of crisis in Pakistan.

Comment
Soon after zia's impious adventure Iranian Revolution fructified with it's leader's plan to export his philosophy to muslim states. US who were friendly to Imam Khomeini's anti-shah campaign became hostile to new Iran apprending Iran's may become a power rival to its status in muslim world. It was here that necessity for sunni shia arose which was considered to be and really proved tobe effective with saudi accomplice available.. For evil end intimidating sheias was found to be inevitable. ( to continue)

Saudi and Yahoodi, now a joint butcher venture to kill Muslims every one and any where found agitating against Israel. Let it be a "jinaza" in Yeman or a group of ladies travelling in a bus in Quetta - as if royal decree ordains. "All anti Israel brand them Shias kill them and KSA stands guarantee for killers immunity." 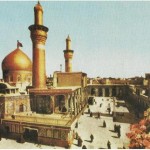